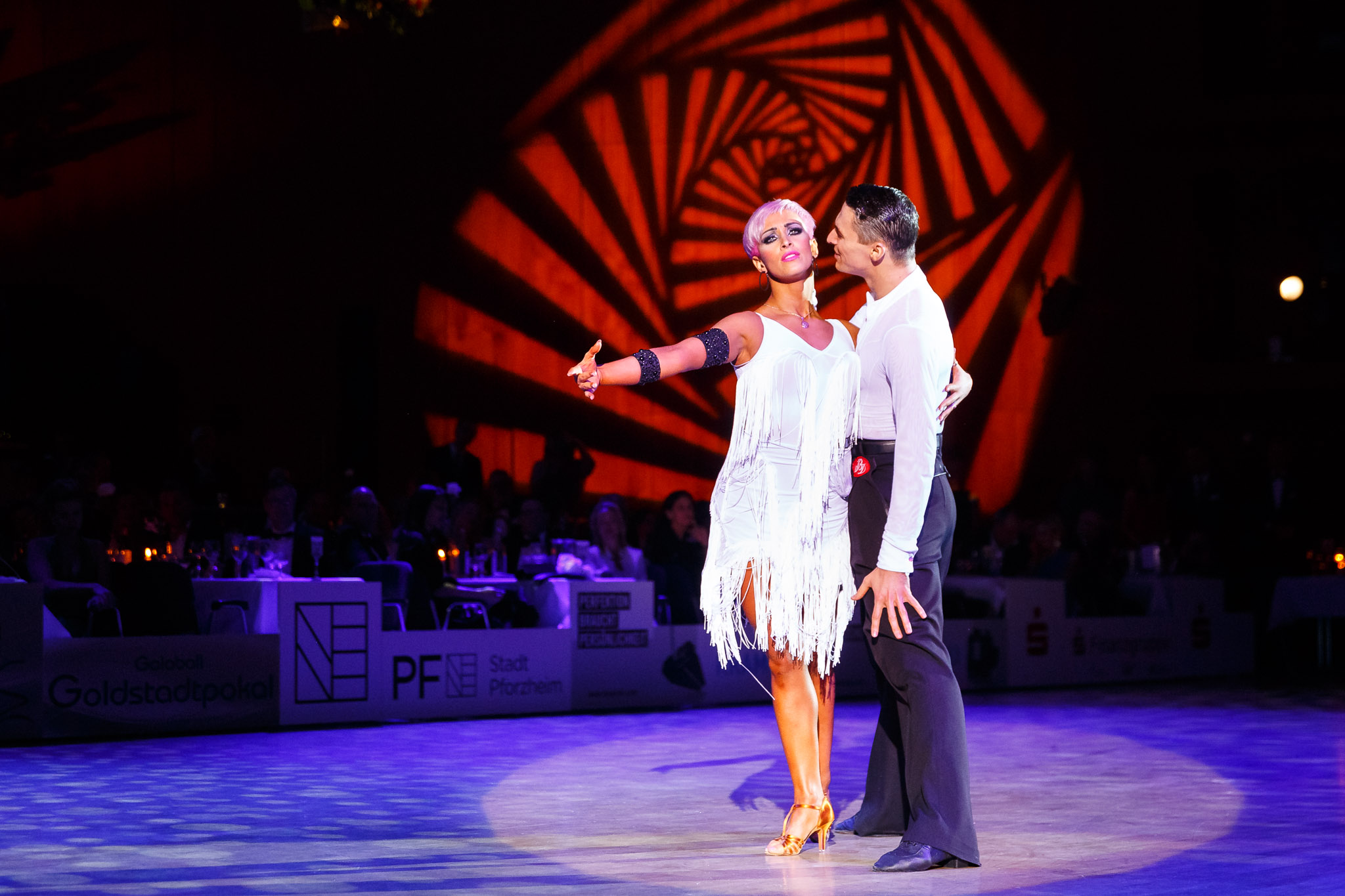 Goldstadtpokal, quite possibly the most beautiful competition of the year

Well at least if you are a photographer. For years Schwarz Weiss Club Pforzheim has managed to organise an immensely good looking event in CongressCentrum Pforzheim. The venue itself is already pretty good looking but especially the way they light the room and particularly the floor makes it a dream for photographers. Beautiful bright, neutral and even light is used to light the dancers. Showing them in great contrast to the dark wood surroundings. Colourful light projections on those walls create interesting backgrounds to play with.

Having some of the best dancers from all over the world participate at the Goldstadtpokal makes it all even better. A world champion, a German champion, former world and German champions and a big percentage of the worlds’ top 20 latin dancers. Live music for the competition and public dances. And always spectacular shows makes it a competition I really don’t want to miss. And quite possibly the most beautiful one of the year.

This year was maybe not as strong as I’ve seen in former years. But it is always great to see the future of latin dancing in action, with a deserved win for Alin-Andrei Beca & Michelle Nazarenus.

The show at Goldstadtpokal are always of a special quality. The afternoon is reserved for different groups of Schwarz Weiss Club Pforzheim to show themselves. From the cute little kiddies group, the little bit older ones with their red balloons, the beginners in competition dancing to the juniors in Latin and ballroom dancing. But also a hiphop and Zumba group, they all gave their best and offered the public a lot of entertainment.

In the evening there was a great act all the way from Taiwan. The Diabolo Walker group gave two great shows. It was unbelievable to see what one can do with such ‘simple’ toy as a Diabolo. This was really a top performance.

More photos of the afternoon shows over at: http://www.vstudio-fotografie.de/p311411278

More photos of the evening shows over at: http://www.vstudio-fotografie.de/p59481340

What is a great Gala evening without a red carpet? So there was one 🙂

As always the Ballroom competition at Goldstadtpokal is invitation only. But boy did they invite good couples. The world champion as well as the German champion were part of this field of six. It probably is no surprise to tell you the world champion won this.

More photos of the ballroom competition at: http://www.vstudio-fotografie.de/p1043299213

The main competition of the day is the Latin competition. It’s ranked as a World Open on the calendar of the WDSF and has a high coefficient for the ranking points the athletes can acquire here. It was therefore not a surprise that a lot of top couples showed up. Most notably the local heroes and currently ranked number 3 in the world, Marius-Andrei Balan
and Khrystyna Moshenska. And they danced one hell of a competition, clearly showing their goals are higher than a third place in the world.

Just after midnight the winners of both the latin and ballroom competition were asked once more to the floor to their dance of honour. In a beautiful setting Dmitry Zharkov and Olga Kulikova gave an impressive show. The real highlight of the evening though was the show Marius & Khrystyna prepared. In 5 parts they took on a time travel and payed tribute to top ballroom couples from the past. They started with Rudolf & Mechtild Trautz from the seventies. Up next was the current German latin head trainer, Horst Beer and his wife. The nineties were represented by Ralf & Olga Müller. Who are currently also part of their trainers team as well as Franco Formica who was featured in the fourth dance with Khrystyna as Oksana Nikiforova. In the fifth dance Marius and Khrystyna showed their current incredible Rumba routine. It was both very entertaining as well as a great demonstration of their great quality and deep understanding of their heritage. A great end of a great evening. Bravo!

More photos of the dances of honour over at: http://www.vstudio-fotografie.de/p59481340

See you next year!